Corporate Average Fuel Economy (CAFE) standards have had the greatest impact of any energy efficiency policy in terms of energy savings, improving the miles per gallon of new passenger cars by more than 90% since 1975.

Medium- and heavy-duty vehicles have disproportionate energy impacts; in 2017, the heavy truck segment made up 9% of total vehicle miles traveled yet accounted for about 23% of gasoline and diesel consumption and 26% of the carbon dioxide emissions of all highway transportation.

Although electric vehicles still make up less than 2% of all cars sold, their sales have more than tripled since 2015 and the number of charging stations has increased five-fold since 2009.

The number of vehicle miles traveled has tripled since 1970, leading to significant increases in traffic congestion, estimated to cost the average American consumer $1,348 per year.

The efficiency of transportation modes depends on the vehicle’s fuel economy, but also on how a specific vehicle is utilized. Vehicles that are efficient and travel full are the best options to reduce strain on infrastructure and traffic congestion while transporting goods and people to their destinations.

Fuel economy of new light duty vehicles has improved by more than 90%, but the future trajectory will be determined by policy

Transportation currently accounts for the largest proportion of U.S. greenhouse gas emissions of any sector (27%) and approximately 70% of U.S. oil use. Corporate Average Fuel Economy (CAFE) standards (and since 2012, the accompanying greenhouse gas emissions standards), have had the largest impact of any U.S. energy efficiency policy. Average fuel economy for light-duty vehicles has improved from approximately 13.5 miles per gallon (mpg) in 1975 to 24.9 mpg in 2017. During this period, passenger cars experienced impressive growth in horsepower and moderately larger vehicle weights (first chart).1 The second chart shows the improvement in real-world miles per gallon of several different light duty vehicle types. However, the immediate future of fuel economy standards is unclear, as the Trump administration has proposed to weaken future standards while barring state emissions standards. 2

Many countries plan to implement fuel economy standards that would surpass U.S. levels

As the U.S. reconsiders the fuel economy standards it established in 2012 (shown in chart above), other countries are strengthening fuel economy targets for their own fleets. China, South Korea, Japan, and the European Union are considering stronger fuel economy standards than the U.S., and their regulations will likely have important impacts for U.S. competitiveness in the auto market, as well as for U.S. greenhouse gas emissions and energy use overall.

Long-haul freight trucking performs only 9% of vehicle miles traveled, but is responsible for 25% of all highway energy use, and is projected to increase

Medium- and heavy-duty vehicles often have higher energy impacts relative to other highway transportation modes, due to their cargo requirements and lower fuel economy. In particular, the heavy truck segment was responsible for approximately one-quarter of total energy consumption, total gasoline and diesel consumption, and the carbon dioxide emissions for all highway transportation in 2017, in spite of the fact that it was only responsible for 9% of the vehicle miles traveled. Additionally, the vehicle miles traveled by this segment are projected to increase by more than 30% by 2050.3 Advances in fuel economy, utilizing alternative freight modes like rail and waterways, alternative fuels in highly efficient engines (such as compressed natural gas and especially renewable natural gas – a prime example of redirecting energy waste to productive energy use with a wide variety of applications),4 and streamlining logistics will likely be important to keep this segment energy-productive, and reduce local particulate, NOx, and carbon emissions. 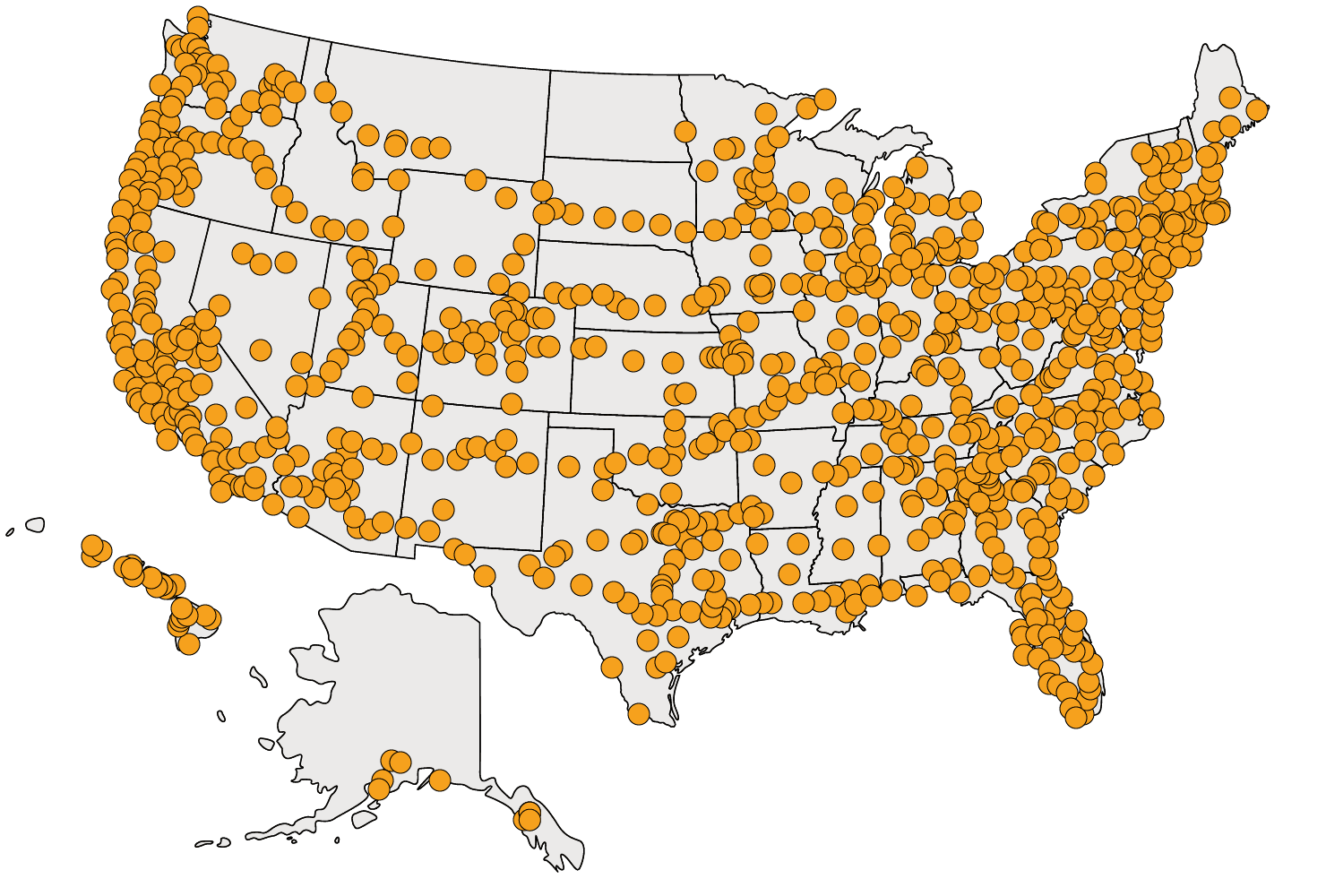 EVs require wide availability of EV charging infrastructure, to mitigate the market barrier caused by range anxiety.7 The number of charging stations available in the U.S. has grown dramatically in the last 10 years, expanding in number and geographical coverage. As of August 2019, there were 25,533 charging stations, including a total of 74,529 charging outlets, that were Level-2 or Direct Current Fast Charge (DCFC) stations that are capable of charging most vehicles in 20-30 minutes.8 This is a 5,600% increase in chargers relative to 2009, when it was estimated that less than 500 charging stations were installed nationwide.9

Since 1970, Americans have nearly tripled the number of vehicle miles traveled by cars and trucks. This has led to a sustained rise in traffic congestion, resulting in increased energy waste, air pollution, and costly infrastructure degradation. One 2018 study estimated that traffic congestion costs the average American 97 hours, or $1,348 a year, and quantified the top 10 most congested urban areas in the United States, including the hours lost and costs per driver.10

Efficiency in the transportation sector is related to the efficiency of the vehicles, but also to the load factor, which reflects vehicle occupancy. These factors can be combined to consider the passenger miles per gallon of gasoline equivalent (pmpGGE), which quantifies the efficiency of moving one person one mile at a given vehicle fuel economy and vehicle occupancy.11 On a pmpGGE basis, rail options tend to be the most efficient travel modes (57 pmpGGE), but domestic flights, which exhibit the lowest fuel economy (0.46 mpgGGE), are surprisingly efficient per passenger due to a high load factor (averaging 113 passengers per flight) — a reflection of airlines’ efforts to ensure planes fly full. In contrast, transit buses currently exhibit lower pmpGGE (30) than cars (39) due to lower average levels of national bus ridership. However, during high ridership periods, transit bus pmpGGE is estimated to be over four times higher (132), surpassing all other national average pmpGGEs.12 This illustrates the value of increasing not only fuel economy, but the utilization of such modes.13