Energy efficiency can be considered a highly cost-effective utility resource: the ratio of lifetime costs to energy production is often cheaper than for nuclear, coal, natural gas, and in many cases for wind and solar energy generation.

Electricity and natural gas utilities are the primary energy provider for most consumers in residential, commercial, and industrial sectors. In this role, utilities, especially where incentivized by decoupling, incentives, or energy efficiency resource standards have managed energy efficiency programs for consumers that have resulted in some of the largest savings of any subnational energy efficiency policy tool.

One enabler of a more flexible and responsive grid is the rapid deployment of advanced metering infrastructure. Smart meter installations, which were an emerging technology in 2008, have reached more than 50% of the installed meter base today.

Demand response programs contributed 12.2 GW in peak demand savings in 2017. These savings were primarily driven by the industrial sector, but the residential and commercial sectors have enormous potential for growth.

Energy Efficiency is a Low-Cost Resource

Sources: ACEEE (2018), Does Efficiency Still Deliver the Biggest Bang for Our Buck? A Review of Cost of Saved Energy for US Electric Utilities; Lazard (2018), Levelized Cost of Energy Analysis – Version 12.0 *Notes: Energy Efficiency program portfolio data from Molina and Relf 2018. Represents costs to utilities or program administrators only, including shareholder performance incentives if applicable. All other data from Lazard 2018 Unsubsidized Levelized Cost of Energy Comparison.

To meet electricity demand, as well as state energy or emissions reduction requirements, utilities can save a kilowatt-hour (kWh) through energy efficiency or generate a kWh. Thus, it is informative to consider energy efficiency as an energy resource: one that is distributed, zero-carbon, and often the most affordable option to satisfy energy needs relative to other generation technologies.

Utilities and other program administrators develop and implement a diverse portfolio of program types that target all customers and sectors using a variety of strategies. Each program type provides a unique level of savings at a specific cost, which can be quantified through several approaches, including the levelized total cost of saved electricity and levelized program administrator cost of saved electricity.

The majority of states are implementing energy efficiency resource standards, and have seen 4x increases in energy savings 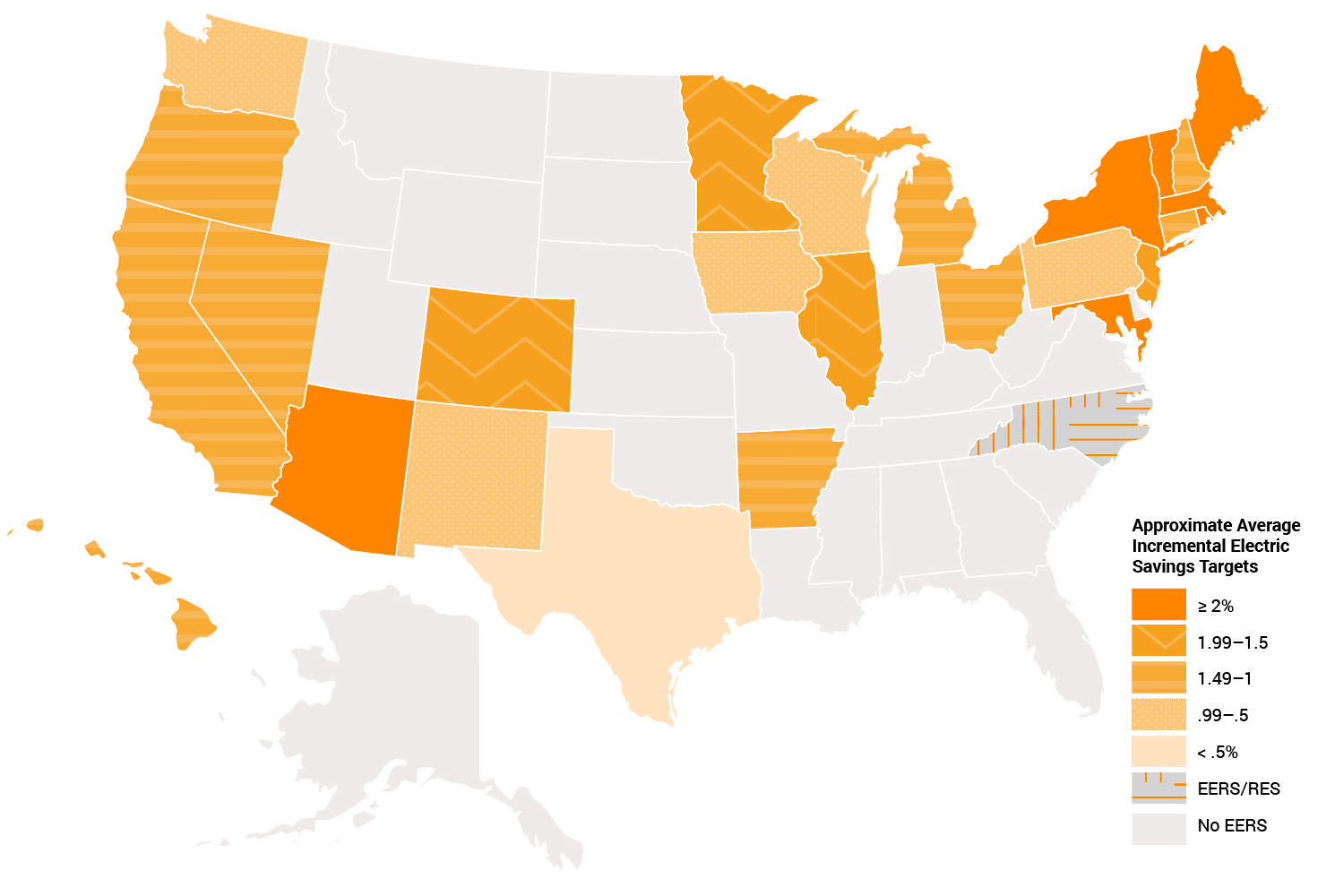 An energy efficiency resource standard (EERS) is a state-level energy efficiency mandate, similar to a renewable portfolio standard (RPS), that requires an electric and/or natural gas utility to achieve a targeted level of energy savings from energy efficiency measures. As of 2019, 26 states have EERS policies in place. In 2017, states with EERS saved on average more than four times as much electricity as those that did not have targets (1.3% of retail sales compared to 0.3%).4

While different states have different efficiency opportunities depending on their climate, geography, and economy, there is a clear trend that states that incentivize energy efficiency by EERS or other policies typically realize the greatest benefits from utility (ratepayer-funded) energy efficiency programs.7

On this basis, EERS states stand out: Vermont, Rhode Island, Massachusetts, Maryland, Illinois, Iowa, and Minnesota all dedicate significant investment to efficiency programs and experience significant savings.8 However, note that energy savings are self-reported and may not be comparable, and that some states include spending on efficiency of non-regulated fuels such as propane under electricity spending, but the fuel savings under natural gas.

2019: States with Decoupling or LRAM for Electricity and/or Natural Gas 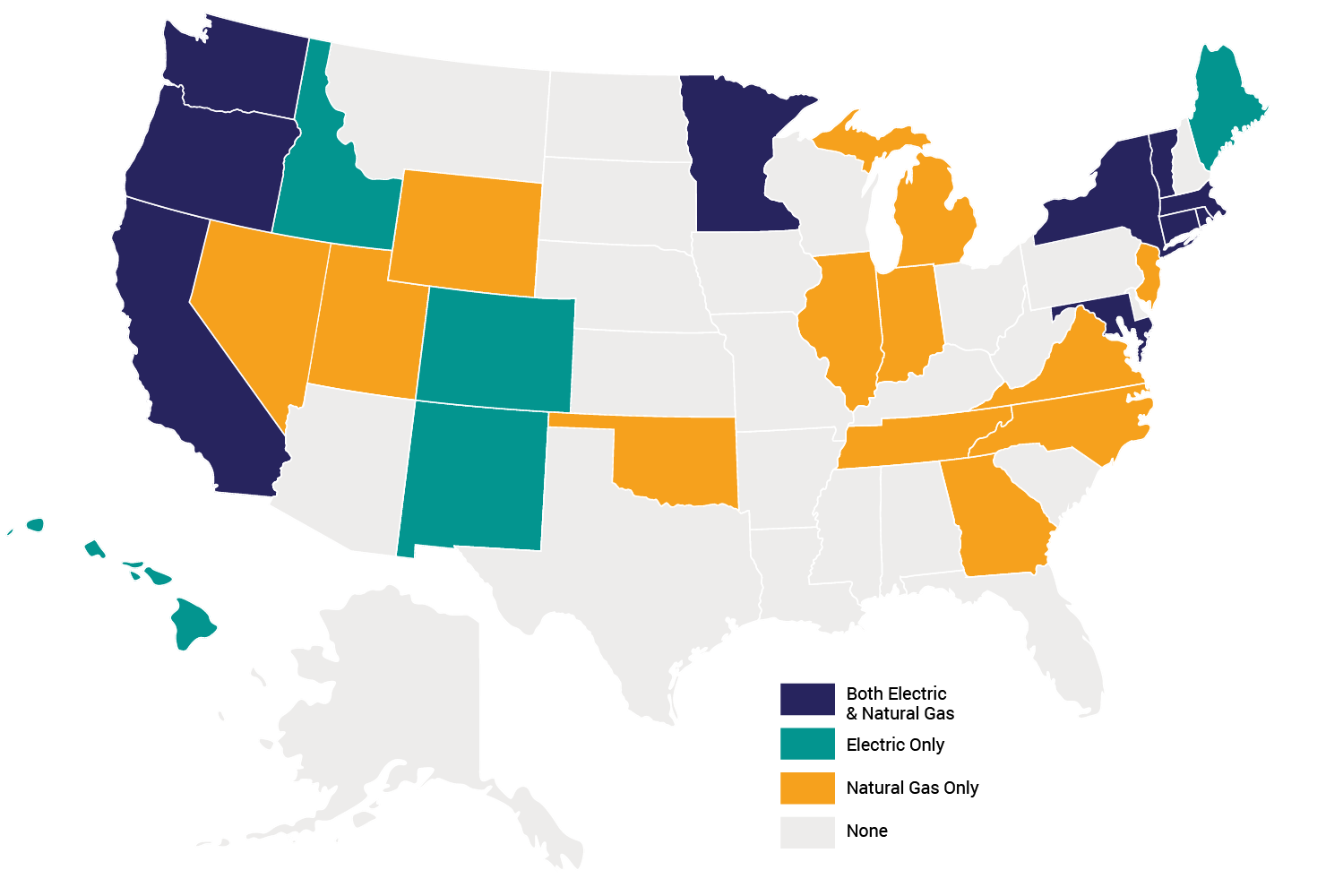 2019: States with Performance Incentives for Electricity and/or Natural Gas 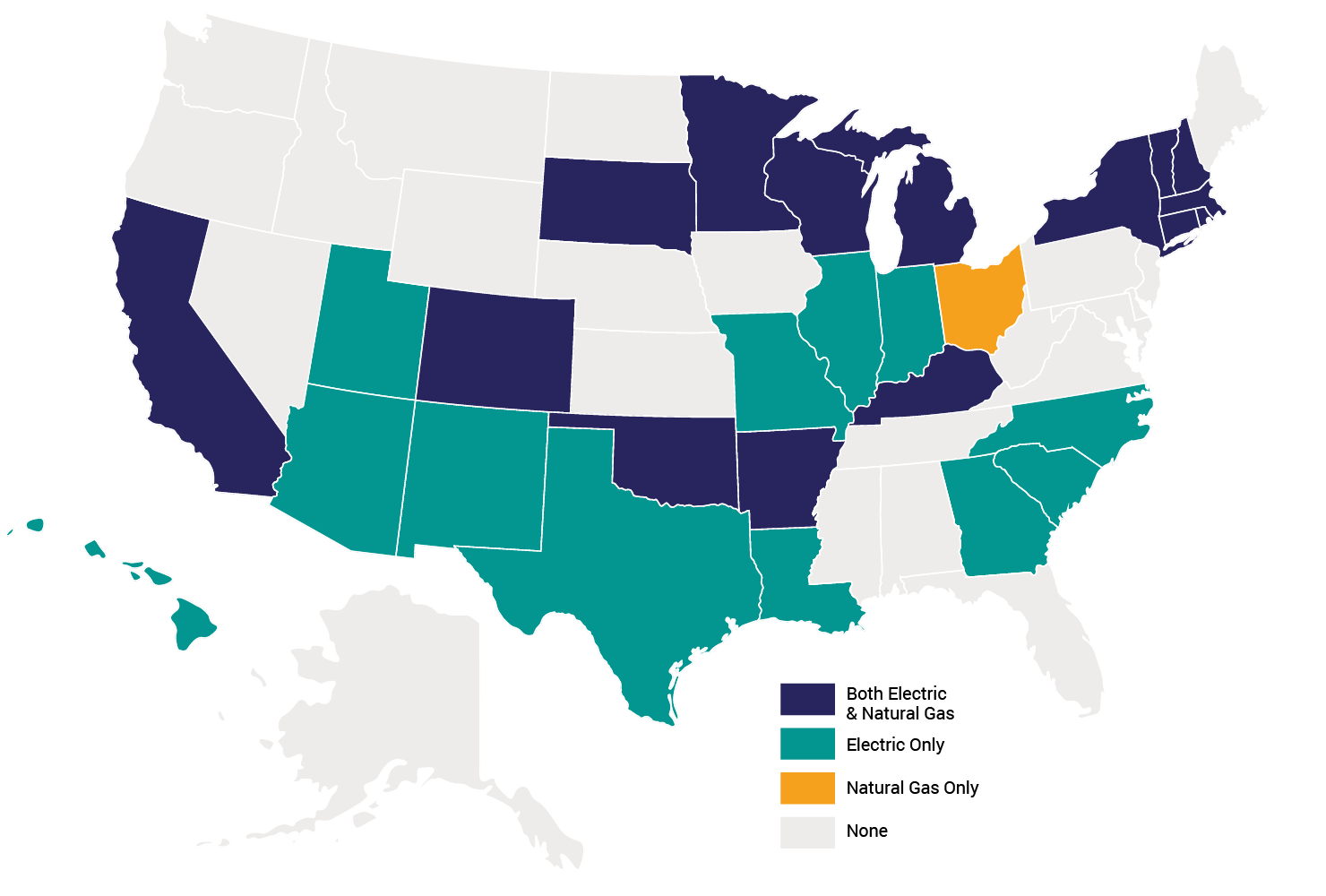 Traditional utility regulation has tied (“coupled”) utility sales to profits: i.e., more sales results in more profits.9 This is a direct disincentive to energy efficiency, and it can be corrected with specific policies, such as Decoupling and the Lost Revenue Adjustment Mechanism (LRAM).

Smart meter installations have surpassed 50% of the installed meter base

Electricity generation presents varying costs, both financial and in terms of emissions, that depend on the time of day, weather, and other factors, such as a downed power plant or disrupted power lines. However, most consumers pay flat rates for electricity, insulating them from these challenges that result from high-demand periods and disincentivizing energy-efficient behaviors that could help stabilize the grid.

Grid modernization technologies that enhance the responsiveness of the grid and enable greater communication between consumers and utilities are evolving rapidly, and utilities are preparing for the increasing role that they may play in their operations. One such example is in advanced metering infrastructure (AMI).

Such technology is the foundation for a more responsive energy system, allowing customers to alter their energy use to reflect grid conditions, and generating data that would allow energy efficiency program implementers to better design energy efficiency programs including demand response, measurement and verification, and peak hour savings.11 While one component of this system – smart meters – was uncommon before 2008, they have grown rapidly in the last decade, now surpassing 50% of the total installed stock of meters in 2017.

Demand response is a tool that allows electricity demand to be more flexible, which enhances the energy efficiency and reliability of the grid, responds to unexpected shortages and periods of high peak demand, and supports the greater incorporation of intermittent renewables.

However, the potential for demand response is likely much higher: a recent study from the Brattle Group estimates that if real-time demand response programs and investments were scaled-up significantly, they could potentially provide 200 GW of load flexibility and approximately 20% of forecasted U.S. peak load in 2030, saving more than $15 billion a year in avoided system costs.12

Since 2002, the heat rates at fossil-fueled plants have fallen by 9%, and power transmission and distribution losses fell by 28%

While end-use is often the focus of energy efficiency programs, there are massive opportunities for greater energy efficiency in power generation, transmission, and distribution systems. Fossil-fuel power plants produced more than 2.6 trillion kWh in 2018, or 60% of U.S. power generation, and 27% of U.S. greenhouse gas emissions.13, 14 These plants have also made gains in thermal efficiency, as measured by their heat rate, which fell by 9% from 2002 to 2017.15 Improving the heat rate of a typical 500-MW unit by only 1% can amount to fuel savings16 of greater than $600,000 annually.17, 18

Transmission and distribution systems have also seen significant decreases in electricity losses.19 Losses, while not entirely avoidable, can be costly: in 2017, U.S. losses were estimated at 202.5 TWh, slightly more than the net generation in the state of California in 2018.20 From 1990 through 2002, the U.S. experienced losses of roughly 7%; however, from 2002-2017, losses fell to roughly 5%. While the U.S. electric transmission and distribution system is now more efficient, some countries have achieved lower levels of losses, including Singapore (2%), Iceland (3%), South Korea (3%), and Germany (4%).21